This post is looking at Dobble (or Spot It in America) and the application of its basic features as a teaching device, both for revising vocabulary and grammar. I’ll be showing you a simple, two page template so that you can adapt the game to your needs and syllabus.

NEW : Since this original post I’ve made an update which includes three sets of cards to download and play with your students. Click here to read it.

Dobble is made up of 55 cards. Each card has 8 images and there are over 50 images spread across the 55 cards. What makes the cards interesting is that you can choose any two cards from the set of 55 and there is always exactly one matching picture between the two cards. There are various ways you can play with these cards but I’m just going to focus on the most simple game.

Each player (in our case student) is dealt a card and places it face up in front of them. The dealer (teacher) reveals the top card of the deck and players have to find their matching item and say it out loud. The winner receives the card and it becomes their new card as they place it face up in front of them, over their original. The dealer reveals the next card and the game continues until all of the cards are used. At the end of the game the winner is the player with the most cards.

I sometimes use it as a quick and fun way to start a lesson because it’s very easy to set up. It only takes five minutes to play a full game and anyone who’s late to the lesson can see how to play and join in easily. Its use as a teaching tool is limited though.

Looking at our three example cards the mix of vocabulary is severe for any lower level students. We have a target, a ‘no entry’ sign, an exclamation mark and a knight chess piece for example. The game has been designed for native speakers so the reason for this strange variety is to allow for some words to be more difficult to say than others. This has been addressed by some follow up releases of the game featuring animals and ‘beginner’ words for children and branching into other languages (You can see them here on their website: http://www.blueorangegames.com/index.php/spot-it). These other versions still have the games biggest flaw however, as they still have too many items of vocabulary at once.

Dobble includes over 50 words. If we want to use this game to teach or practice vocabulary we need a smaller version. Here’s one I made earlier: 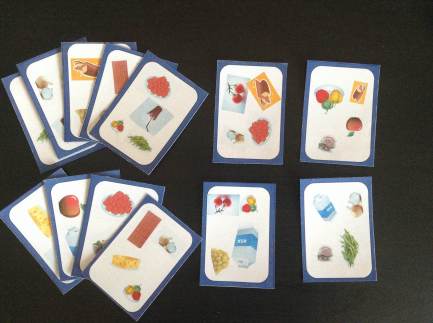 This is my first attempt at a Dobble clone. To get a smaller version we have 13 pictures between 13 cards, with 4 pictures per card. The important feature remains: each card shares exactly one picture with every other card. My version is using the vocabulary we’ve recently studied in a YL class and can be played to practice that vocabulary. We can play ‘Dobble’ with the cards (as described previously) with the teacher as the dealer. We can also play it with students as a single group, allowing for a varied drilling exercise. Once the students know the game they can play it themselves, taking turns being dealer/teacher.

There are also further games we can play with the cards. We can play a mingle game. Give each student a card (up to 13 students). Students find a partner and quickly identify their shared picture. They then swap cards and carry on. Each interaction is quick and the teacher can monitor for pronunciation difficulties. So now we have a set of cards featuring useful vocabulary and a range of games we can play.

The cards can be used for more than just vocabulary revision however. The set pictured above has been made with countable and uncountable nouns in mind. We can play the same games as before, but this time students have to say a short sentence instead of just the word.

Instead of “peppers” – “There are some peppers.”

Playing first as a class, to practice drilling, and then playing among themselves with careful monitoring, it should be a short and manageable step up in complexity and challenge for students. Adapting this idea for other vocabulary or grammar items should be straightforward. I can imagine a set of 13 cards for hobbies and sports. First practicing the vocabulary and then using the cards with sentences about like/don’t like/love/hate. In the mingle game, students take turns making sentences with the picture their cards share: “I hate playing football.” “I like playing football.”

There are a lot of possible adaptations that could be made, as well as different games that could be played using the same cards and I will make some follow up posts with new concepts for both. I would also be very interested in hearing ideas from you once you’ve tried making your own version and using them in class.

Creating your own version is very easy. First download this Powerpoint file [Template] and find pictures for your chosen vocabulary set of 13 words. Give each picture a number and attach each picture to its corresponding number on the template. At this stage you can either print the template and glue pictures onto the cards directly or drag and drop pictures in Powerpoint. I prefer using Powerpoint but if you already have a set of pictures to use and they’re not on your computer it may be easier to make them physically. You need four copies of each picture to make the cards this way.

The two pages of the template look like this, ready for you to insert your 13 pictures.

The space on page 2 is big enough to store the pictures you’re going to use. The final step is to cut them up but you may want to back them onto some coloured card first to identify each set and to make them more durable.

I hope you’ve found this useful and you have fun making and playing the game with your students. (Here’s the template file again, in case you missed it: [Template] )

Check out the front page, or use the search bar, to find dozens of games and activities on the site.

I am available for conferences and  workshops, helping teachers to incorporate effective classroom games and activities into their lessons.