The alibi game is popular with teachers and students. It’s an effective way to practise narrative tenses and question forms. There are lots of versions of this activity out there but for the purposes of part 2, where we’ll be discussing ways to adapt the game, here’s my version.

If you are already familiar with the alibi game and have used it before, then you may want to go straight to part 2 click here

I’ve made some alibi and investigation cards that you can use. There are three levels of support, depending on the focus of your lesson and your students’ level. Choose the right version for your class, print one copy for every three students, and cut the cards up before the lesson. 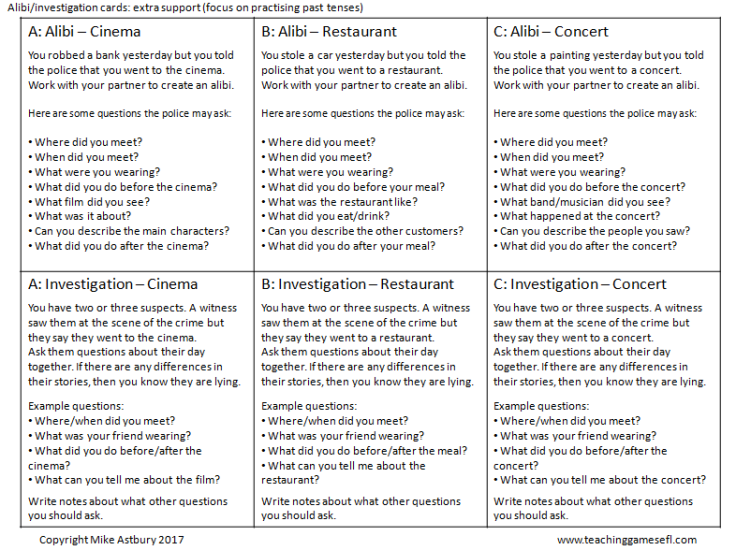 I last played this game with an intermediate teenage class. We played three rounds and while I used the cards for the first and second round, by the third they were confident enough to play without them.

You should pre-teach some crime/law vocabulary before the game. With my class we had already started the subject and they knew, alibi, suspect, crime scene, arrest, witness, criminal record, prison etc.

Split the class into three groups and give them a letter – A, B and C. Ask all the ‘A’s to stand up. Explain that they are are criminals and yesterday they robbed a bank. Today, the police have arrested them as suspects for the crime and in five minutes they are going to be questioned. They need to work together to create a perfect alibi that will prove that they couldn’t have robbed the bank.

Give each of the ‘A’s a copy of the ‘A – Alibi’ card and put them into pairs (and one group of three if necessary). They will work together to create an alibi using the prompts on the card. Explain that after five minutes, you’re going to take the cards back and they will be questioned by the police.

If you can use a corridor without disrupting other classes, then ask the ‘A’s to leave the room and prepare their alibis. If you can’t, then divide the class into two halves and ask students to plan their alibis quietly.

Then the ‘B’ and ‘C’ students form teams of four. Hand out the ‘A – investigation’ cards, one between two, and they have four minutes to discuss what questions they’ll ask. They can make notes on their cards and refer to them during the interview stage.

You need one team of four detectives for each pair of ‘A’s. If you have an awkward number, a group of five or six can interview three ‘A’s. The game is easy to organise if you can divide your class into threes. Otherwise you need to make slight adjustments to the groups and some students will be suspects twice. The important thing to remember is that suspects must be interviewed separately for the game to work.

Monitor and check in with all of the groups, especially if you have students in the corridor, and assist and prompt where necessary. After five minutes bring the ‘A’s back put them with pairs of detectives (with one or two individual detectives if necessary). If possible, arrange the chairs so that each pair of detectives is facing their suspect, and the suspects can’t easily communicate.

Collect in the ‘A – alibi’ cards and instruct the suspects that they can’t communicate with each other during the interview. Detectives have five minutes to ask questions and note down the answers. After five minutes they’ll compare their answers in their groups and if they can find two differences in the alibis, the suspects are found guilty.

In open feedback discuss what they think went well and what they should try and improve. Include a brief language input stage if necessary.

With higher level classes you can play this activity without the cards as prompts. When I played this game with my students they didn’t use the cards at all for round three; the suspects invented their own alibis while the detectives wrote down their own questions (with some support from each other and the results written on the whiteboard).

You can extend the speaking portion of the game by having two interviews for each round. In this version detectives swap suspects after five minutes and then have three minutes to interview the other suspect. This means they can cross reference the answers that the first suspect gave. This requires less teamwork for the detectives and is a lot more difficult for the suspects.

For more adaptations of the alibi game you can read part 2 by clicking here. I’ve written a second post that looks at using the same format but adapted for lessons on music, business, holidays and more!

One thought on “Adapting the alibi game – part 1”