Playing board games in class – Adapting ‘roll and move’ games

When you look online for grammar or vocabulary board games you often find simple ‘roll and move’ games. This post will look at ways we can expand this style of board game to make it more fun and a better tool for language acquisition.

As an example I made a game board to practise the future perfect and future continuous which can be downloaded here as either a PDF or a Powerpoint. 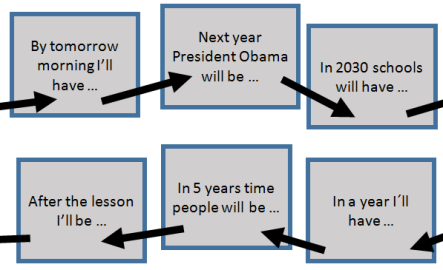 Players place their counters at the start and take turns rolling the dice. You follow the instructions of the space you land on; in this game you have to complete the sentence using the future continuous or future perfect.

Students shouldn’t repeat themselves or copy another player’s sentence. Students should consider each sentence and whether it’s valid before moving on to the next turn, helping each other to overcome mistakes.

Early finishers look back at the board and make sentences together using prompts that nobody landed on during the game.

A basic ‘roll and move’ game can be boring on its own so we want to increase the level of interaction and get students to be more invested in the game. Try one or more of the following ideas when you play (but be selective and don’t overload students with too many additional rules):

After playing the game there are a few ways to help students share the sentences they’ve produced and recycle the target language.

Finally here are a few additional ways to add some variety to the games you play.

If you’re interested in some of the game design theory behind decision making and increasing player interaction a friend of mine, David Newton, wrote about it on his blog recently in reference to Snakes and Ladders.

For more posts on adapting board games for use in the classroom check out the front page and the links below:

I am available for conferences and  workshops, helping teachers to incorporate effective classroom games and activities into their lessons.